The good, The bad and The Ugly

There were times when Mahabharata was the most loved television program. You could not stop watching without a blink of an eye. I loved watching all the characters the heroes and villains, they all have especial traits. We used to mimic all the characters esp. sakuni’s famous dialogue starting with Bhanje. I was pretty bad whilst my friends were awesome.

One particular day I had an urge to read the most loved book Bhagavad Gita. I wanted to know what does the war between kaurava and pandava signify. Is it only a war between good, bad and the ugly or does it have more then what I have perceived watching tv a long time ago in my childhood. I googled and found that there were many interpretations of Bhagavad Gita. After couple of research I chose Paramhansa Yogananda’s interpretation edited by his disciple swami kriyananda.

As you start going though the chapters you will find that you are actually exploring yourself( your consciousness) in a deeper level. Bhagavad Gita which is a part of Mahabharata is an allegory which is woven upon a history. It is said that the main characters in the story actually did live but most of the characters are inventions which symbolizes psychological traits and states of consciousness.
The main characters of Mahabharata are:

King Dhritarashtra – the blind mind
Sanjaya -introspection
Prince Duryodhana – king of material desires
Dronacharya – habits/ mental tendencies/ past samskaras(Dronachaya is the guru of both pandavas and kuravas i.e. the good and the bad guys. we all have the habits that are good and bad- the upward qualities and downward tendencies.)
Bhisma – ego identiy(he has a power to die only when he himself wills it and so is with the ego. You can only relinquish your ego willingly no any other human can help you.). The commander in chief of kurava is Bhisma and they do every thing to protect bhisma(ego identity).

Draupadi – Draupadi is fated to marry all five pandava brothers. The five brother stands for the five chakras in the spine. It signifies the kundalini’s union with each chakra.

Before the war starts krishna drives  his chariot to a  point between the two armies.  Arjuna sees he is fighting against his own family, teacher and friends and replies to krishna:

O Slayer of madhu and destroyer of Foes( Krishna)! How can I make war, shooting arrows[of concentration] against Bhishma[my own deep-seated ego-reality] and against Drona[my own “preceptor” of past tendencies, which have always defined me as I was ( and perhaps am)]? Those great warriors deserve (only my) respect and reverence! I would find even a life of begging preferable to slaying( these, my ancient and self defining realities), preceptors of all that I have ever been and known. Even if they are wrong, they have nevertheless been my teachers. What happiness could I find if, in seeking it, I (stooped so low as) to shed their blood?

And Krishna’s teaching goes on and on….  Finally I found all these characters live inside me-the good, the bad and the ugly 😛 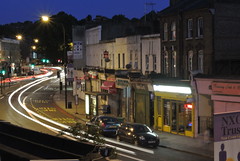